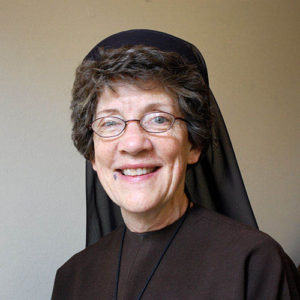 Franciscan Sisters of the Eucharist of Meriden

Sister Catherine Mary Clarke is a member of the Franciscan Sisters of the Eucharist of Meriden, Connecticut. She is a Licensed Clinical Social Worker and is the Director of Social Services for Franciscan Home Care and Hospice Care since 2006. She works full time as the Social Worker, Pastoral Care Counselor and Bereavement Counselor. Prior to her current position, Sister worked with a group of professionals to establish the first hospice program in Rome, Italy, an experience which awakened her to the profound need for integration of the spiritual dimension in the dying process. Sister Catherine Mary earned her Bachelor’s Degree in Natural Science from Shorter University in Rome, Georgia and worked as a Naturalist prior to entering the Franciscan Sisters in 1986. She earned her Master’s Degree and License in Clinical Social Work from the University of Connecticut. Sister is involved in the formation process of Novices and Sisters with Temporary Vows preparing for Perpetual Vows.  She is an active member of the Board of the Meriden Chapter of Birthright and of Carolyn’s Place Pregnancy Care Center.

Compassionate Care for the Dying and their Families